A trove of internal emails from within the home affairs department has revealed the Australian government considered cancelling the visa of refugee footballer Hakeem al-Araibi after his wrongful detention in Thailand last summer.

On Friday the ABC revealed how a series of bureaucratic bungles including a crucial email from Border Force to the Australian federal police that went unread for five days may have put al-Araibi at further risk during his 76-day incarceration.
The emails, released under freedom of information laws, reveal that after Border Force officials initially failed to notify the AFP of al-Araibi’s refugee status, a series of bungled communications between the two departments meant Interpol was not aware of his visa status until a media report published two days after his arrest. 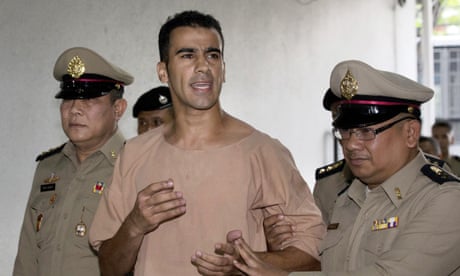 Al-Araibi was arrested on 27 November last year when he arrived in Bangkok with his wife for their honeymoon. Thai authorities presented an Interpol red notice, issued at Bahrain’s request, as the basis for his arrest.

Bahrain sought his extradition over vandalism allegations, which al-Araibi has always denied.

Interpol had initially been told by Bahrain that al-Araibi had left Australia on a fraudulent passport.

The agency – via the AFP – was then told by Border Force officials that al-Araibi was travelling on a legitimate travel document and that he was on a protection visa.

But that crucial email went unread for five days, according to the ABC. AFP deputy commissioner Ramzi Jabbour has previously told Senate estimates the email was missed because the official who received it had gone on leave.

But the timeline of the emails obtained by the ABC show Border Force responded to the AFP’s request for confirmation of his passport details less than an hour after it was sent at 9.06am on 28 November.

A spokesperson for the AFP explained the bungle to the ABC by saying the AFP official had “worked for a short period on the morning of 28 November 2018, following which they were on leave until 3 December 2018”.

The emails also reveal that on that same day home affairs looked into cancelling al-Araibi’s protection visa during his incarceration. An email sent by the home affairs character and cancellation branch to Australia’s Interpol branch in Canberra showed an official sought to “disclose the red notice for the purposes of visa cancellation”.

A spokesperson for home affairs told the ABC any case could be referred to the character and cancellation branch if an Interpol red notice was issued.

The spokesperson said officers were “required to assess all circumstances … and were able to quickly determine that the red notice did not enliven the cancellation provisions”.

It would eventually be revealed that Bahrain was granted the red notice against Interpol’s policies, which protect refugees from the country they fled. Al-Araibi has lived in Australia for five years and has refugee status based on his fears of persecution in Bahrain.

Al-Araibi was eventually freed when Thailand dropped the extradition proceedings, and he returned to Australia in February after 76 days in jail. In March, he became an Australian citizen.

“As I think the Australian Border Force commissioner, Michael Outram, pointed out in Senate estimates and the now previous federal police commissioner has made note of as well, there was a human error in that case,” he said.

“The Australian federal police and ABF work on thousands of cases each year and in this one case, they made an error. They are looking at the systems and we want to make sure this doesn’t happen again.”

But the case raises questions about communication within the home affairs department.

In February, former AFP commissioner Andrew Colvin said the AFP – which acts as Interpol’s national central bureau in Australia – relied on the home affairs department to access visa information, and to tell them if someone subject to a red notice was a refugee.

John Blaxland, a professor at the strategic and defence studies centre at the Australian National University who has been critical of home affairs’ formation because of the potential to erode checks of power between agencies, said al-Ariabi’s case would likely be used by the department to argue for further streamlining.

Hakeem al-Araibi: thank you Australia for bringing me home – but my fight is not over

“I suspect [the department secretary] Mike Pezzullo may well use this as an argument to justify the further consolidation of power because it will point to the need for greater streamlining of IT arrangements, for example,” he said.

“Clearly there has been a degree of disconnection here. So while the action was embarrassing for all concerned, it will be fuel for his campaign to bring about greater coordination and internal tightness of information.”

Blaxland said there would need to be additional checks in place to prevent abuses of power if the barriers between agencies were broken down further.

“I get that there is utility in streamlining things, particularly to prevent the occurrence of what happened with Hakeem al-Araibi, but with that comes a concern about the all-seeing eye,” he said.

“While closer control could have been helpful with Hakeem, it could well be detrimental in other cases and that’s the key thing. I’m OK with additional measures as long as there are safeguards and account measures to ensure that power is not abused.”