The Thai government has pleaded with Australia and Bahrain to sort out the situation with Hakeem al-Araibi and find a “win-win” solution amid growing international anger at the south-east Asian nation.

In a statement early on Wednesday, the Thai foreign affairs ministry defended Thailand’s continuing detention of al-Araibi, a Bahraini refugee who is a resident of Australia.

Australia has demanded his release and return. He was formally granted refugee status in 2017.

Bahrain is seeking his extradition for a 10-year jail sentence which al-Araibi claims is politically motivated.

“Thailand hopes that Australia and Bahrain will have the goodwill to earnestly work together towards finding a win-win solution to this issue,” the ministry’s statement said. 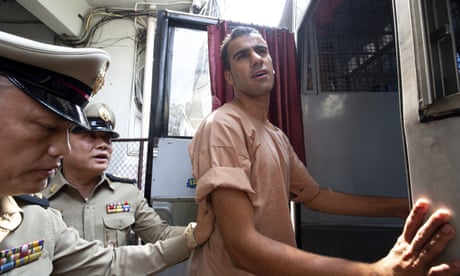 “Thailand does not gain anything from holding Mr Hakeem in custody. But as a sovereign country that has legal obligations and commitments to the international community, Thailand finds itself in the middle of a case involving two countries competing for Mr Hakeem’s custody.

“Under such circumstances, Thailand has no other legitimate option but to cooperate in accordance with the law and suggest that the two countries, both good friends of Thailand and good friends with one another, talk to each other to sort out their problems and come up with their own solution, instead of trying to find an indirect solution from Thailand, who has only become involved in this case by chance.”

Al-Araibi was arrested at Bangkok airport on 27 November on the basis of an Interpol red notice, issued to Bahrain by Interpol against its own policies designed to protect refugees from the countries they fled.

Australian federal police, acting as the Australian branch of Interpol, has been criticised for apparently failing to notice al-Araibi’s refugee status when it notified Thailand of his imminent arrival.

The red notice was cancelled within days, but Thailand said because Bahrain had also made a formal extradition request he could not be released.

International condemnation of al-Araibi’s treatment has focused on Thailand’s role, particularly since it was confirmed the government has the power to release him.

The statement said the “executive branch cannot interfere with the judicial process”.

The ministry said it had not been aware of al-Araibi’s case and would not have become involved had it not received the red notice alert and Bahrain’s subsequent arrest and extradition request.

“It took several days after the arrival of Mr Hakeem before the Australian authorities informed us that the red notice had been cancelled,” it said. “By that time legal proceedings in Thailand … could not be reversed.”

However, al-Araibi supporters have questioned the timeline of his travel, and whether it was coincidentce that Bahrain requested and received its red notice at the same time he organised to travel to Thailand, despite his conviction being five years old by that time.

The 25-year-old applied for his Thai visa on 4 November through the Melbourne consulate, and it was approved on 8 November. That same day Bahrain was granted its red notice.

On Monday the Thai criminal court gave al-Araibi’s lawyers 60 days to prepare a defence to Bahrain’s request and refused bail.

The statement maintained the legitimacy of Bahrain’s arrest warrant and conviction of al-Araibi – a widely discredited verdict delivered in absentia over an act of vandalism which occurred when, or very shortly after, al-Araibi was playing in a televised football match.

“We ask that everyone refrain from prejudging the court’s rulings and prematurely jumping to the conclusion that Thailand will extradite Mr Hakeem back to Bahrain,” it said.

“The court will consider this case thoroughly and in accordance with the due process of law and the evidence provided, including Bahrain’s arrest warrant and court order for Mr Hakeem, who had been convicted under Bahraini laws.”