Bangkok, Thailand (CNN)Hakeem Al-Araibi, the refugee footballer detained in Thailand, was freed from prison Monday after Bahrain announced an unexpected decision to drop its extradition case.

A Thai court approved the request to drop extradition proceedings, according to Chatchom Akapin, director general of foreign affairs for the Office of the Attorney General.
The news delighted Al-Araibi and his supporters, who had launched a global campaign calling for his release. Al-Araibi has refugee status in Australia.
Upon his release, Al-Araibi, 25, was taken to Bangkok’s Suvarnabhumi International Airport to fly to Melbourne.
A citizen of Bahrain, Al-Araibi was arrested and detained last November while on his honeymoon in Thailand at the request of the Bahraini government. He had been sentenced in absentia in 2014 to 10 years in prison for a vandalism charge in Bahrain. Al-Araibi fled to Australia, where he was granted refugee status in 2017. He now plays for semi-professional Melbourne-based club Pascoe Vale.
Al-Araibi said he feared he would be tortured and killed should he be handed over to Bahrain by the
“I am afraid to go back,” he told CNN during an interview inside the prison on February 4. “Please fight for me.”
Thailand’s attorney general has previously said that his case fell in line with Thai law and it would be up to the courts to decide whether he be extradited.
Australian Prime Minister Scott Morrison welcomed the news Monday, thanking Thai authorities for their help with the matter. But he cautioned “as it always is in these cases, people aren’t home until they’re home.”
“I’m pleased Hakeem is coming home and I’ll be pleased to see him at home when that occurs. But until that happens, we’ll continue to work this process as you would expect us to, not taking anything for granted and doing so in a way that is deeply appreciative and respectful to the Thai government,” Morrison said.
Bahrain’s Foreign Ministry said in a statement carried by local media said that Al-Araibi’s guilty verdict would remain in place despite the decision to drop its extradition case.
“The Kingdom of Bahrain reaffirms its right to pursue all necessary legal actions against Mr. Al-Araibi,” the statement read. 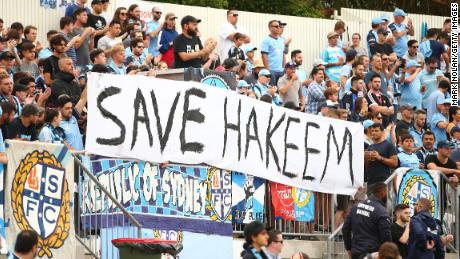 Activists campaigning for Al-Araibi’s release said that the footballer should never have been detained; an international warrant was issued for his arrest although such red notice requests are not meant for refugees.
Former Australian national team player Francis Awaritefe, a vice-president of the global footballers’ union FIFPro, said last week: “Hakeem is a refugee. He’s a human rights defender. And therefore, under international law, he should not be a subject of these proceedings.”
Football’s world governing body FIFA has been involved in Al-Araibi’s case, with Secretary General Fatma Samoura writing to Thailand’s Prime Minister Prayut Chan-o-cha to campaign for his release. 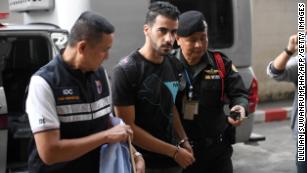 ‘Please fight for me.’ Bahrain soccer player detained in Thailand pleads for help
In a Twitter post on Monday, Craig Foster, a former Australia football captain who has led the charge to free Al-Araibi, said: “My thanks go to the wonderful people of Thailand for your support and to Thai Govt for upholding international law. My deepest gratitude. Also to everyone who stood for what’s right.”
Last week, the Australian Football Federation (FFA) canceled a proposed training camp in Thailand for its Under-23 men’s national team in a show of support for Al-Araibi, who has been openly critical of the Bahraini government and its record on human rights.
In 2012, he was arrested and detained in Bahrain for three months, accused of vandalizing a police station during a protest. He told CNN that he was released because he presented evidence that he was playing soccer live on TV when the protest happened.