Refugee footballer Hakeem al-Araibi has been given 60 days to prepare a defence against Bahrain’s attempt to extradite him from Thailand.

The 25-year-old will remain in a Thai prison for more than two months after a judge denied him bail and gave his lawyers until 5 April to file a written appeal before the next scheduled hearing on 22 April.

Al-Araibi arrived at Bangkok’s Ratchadaphisek criminal court on Monday morning shackled and barefoot with more than a dozen other prisoners. He was flanked by a guard at each arm and several more behind him.

He shouted “don’t send me to Bahrain”. Supporters shouted back: “Australia is with you” and “Your wife sends her love”.

Al-Araibi, the Australian resident and refugee from Bahrain, has spent almost 70 days detained in Thailand while his country of birth seeks his extradition. A high-profile and extraordinarily unified international campaign seeks his return to Australia, but Thailand has insisted on sending his case through the courts.

His appearance on Monday marked the formal beginning of proceedings after Bahrain’s extradition request was formally accepted for consideration on Friday.

In court, Al-Araibi stood as the judge read out Bahrain’s allegations against him. He told the court he refused to be extradited.

Al-Araibi told the judge the charges against him were politically motivated, and that he feared persecution for religious reasons and for seeking asylum in Australia.

Allan McKinnon, Australia’s ambassador designate, as well as delegates from other countries and embassies, appeared as a “coalition of support”, according to Craig Foster, the former Australian Socceroo captain who is spearheading the campaigning to free al-Araibi.

The coalition included representatives of 14 countries and the European Union.

Speaking outside the court, McKinnon called for the Thai prime minister, Prayut Chan-ocha, to directly intervene to ensure the footballer’s release, after the prosecutor had confirmed he had executive powers to do so.

He said Fifa had made overtures to the football associations of Thailand, Bahrain and Australia but said there were “no legal grounds” for the organisation to enact sanctions called for by advocates.

“That problem is not with the football association in the two or three countries, the problem is elsewhere,” he said.

Al-Araibi was arrested on 27 November when he arrived in Bangkok for a honeymoon with his wife.

Thai authorities made the arrest on the basis of an Interpol red notice which was issued against the agency’s own policies, which dictate they can’t be issued against refugees on behalf of the countries they fled. 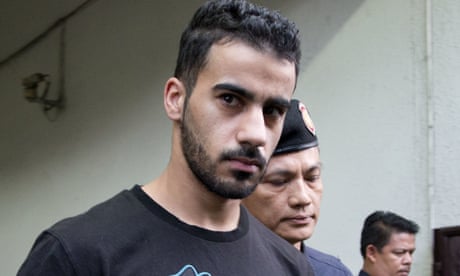 Within days the red notice was lifted, but Thai authorities instead pointed to an extradition request by Bahrain.

Al-Araibi’s detention was extended by 60 days to allow Bahrain to file its extradition documentation, which was assessed by prosecutors and given to the Thai court on Friday.

Thailand maintains it is following legal processes and its immigration chief, Surachate Hakparn, continues to refer to arrest warrants, despite the lifting of the red notice.

It has continued to entertain Bahrain’s claim that Al-Araibi is wanted over the vandalism incident of 2012, for which he was convicted in absentia to 10 years in jail, despite evidence he was playing in a televised football match either at the same time as the crime or so close to it he would have been unable to get there.

Thailand is not a signatory to the refugee convention and has a history of sending refugees back to their countries of origin. Last month, amid international outcry about Saudi teenager Rahaf al-Qunun, Hakparn pledged the country would no longer return refugees “involuntarily”, but said that did not apply to al-Araibi’s case.

Chatchom Akapin, director general of the Thai attorney general’s international affairs department, has said the extradition request is for a criminal act. Extraditions for political prosecutions are against Thai law, according to the Bangkok Post.

Bahrain, which has an extensively documented history of prisoner mistreatment, including an inquiry commissioned by the king which found a number of deaths in custody as a result, denies al-Araibi faces danger.

Al-Araibi told the Guardian last month he believed Bahrain was seeking his return as retribution for public comments he made in 2016 criticising a member of the royal family over his failure to protect athletes during Bahrain’s crackdown on pro-democracy protests in 2011 and 2012.