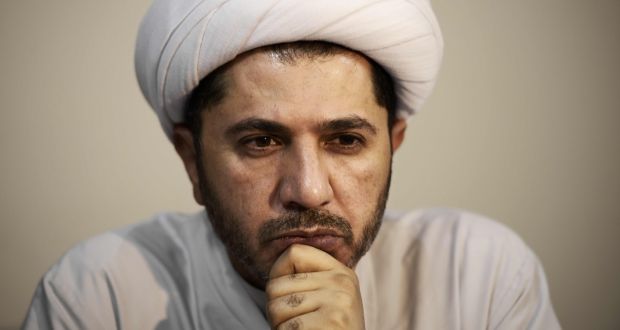 A Bahraini court on Sunday ordered life sentences for three senior opposition members, overturning a previous acquittal on charges of spying for Qatar in what an international rights group called a “travesty of justice”.

A public prosecutor statement said the court sentenced Sheikh Ali Salman, secretary general of the opposition al-Wefaq group, and Sheikh Hassan Sultan and Ali Alaswad, members of the same group, to life in jail for transferring confidential information to and receiving financial support from Qatar.

Bahrain’s public prosecutor had appealed a court ruling that acquitted the three senior leaders last June in a rare win for opposition figures who say they have been targeted by prosecutors for their political views.

Sultan and Alaswad were tried in absentia. Salman is already serving a four-year prison sentence for inciting hatred and insulting the interior ministry, following his arrest in 2015.

Along with Saudi Arabia, the United Arab Emirates and Egypt, Bahrainimposed a boycott on Qatar last year, accusing it of supporting terrorism and cosying up to Iran.

Qatar denies the charges, saying they are an attempt to undermine its sovereignty.

Since the Bahrain authorities crushed street protests in 2011, demonstrators have clashed frequently with security forces, who have been targeted by several bomb attacks. Manama says Qatar supports the unrest, accusations denied by Doha.

“This verdict is a travesty of justice that demonstrates the Bahraini authorities’ relentless and unlawful efforts to silence any form of dissent,” Amnesty International said in a statement.

“Sheikh Ali Salman is a prisoner of conscience who is being held solely for peacefully exercising his right to freedom of expression.”

Alaswad, who has lived in London since 2011, has told Reuters that in the case the public prosecutor used secret witnesses and a video from a Bahraini television channel which experts described as edited and incomplete.

Courts in Bahrain, where the US navy’s Fifth Fleet is based, last year dissolved al-Wefaq and the National Democratic Action Society (Waad), accusing them of helping to foster violence and terrorism.

Bahrain has barred members of dissolved opposition groups from running in parliamentary elections due to be held later this month.

Wefaq, which has strong links to the country’s Shia Muslim majority, and Waad, which is seen as a secular movement, have both campaigned for social and political reforms in the country, which is ruled by a Sunni Muslim royal family. – Reuters