LONDON – The son of an imprisoned Bahraini activist has vowed to keep on fighting “to save his father’s life” after ending his two-month-long protest outside Bahrain’s embassy in London on Tuesday.

Ali Mushaima, 35, began a hunger strike on 1 August, to protest over the denial of proper cancer care to his 70-year-old father, Hassan Mushaima, in a Bahrain jail. His father is serving a life sentence for leading anti-government protests in 2011.

For 63 days Ali Mushaima has been sleeping on a thin mattress in a tent outside the Bahraini embassy. He was on hunger strike for 44 of those days, losing 16 kilos, and was hospitalised briefly on 30 August as his condition deteriorated.

Ali continued his hunger strike for another two weeks after being taken to the hospital. But he has now ended his sit-in following concerns from doctors and activists that he could be badly affected by the impending winter weather.

Speaking outside the Bahraini embassy on Tuesday, Mushaima thanked his supporters but said he still feared for his father’s life.

“I came out here because I fear for my father’s life, and I will continue fighting to save his life,” Mushaima told a crowd of supporters, activists and journalists. 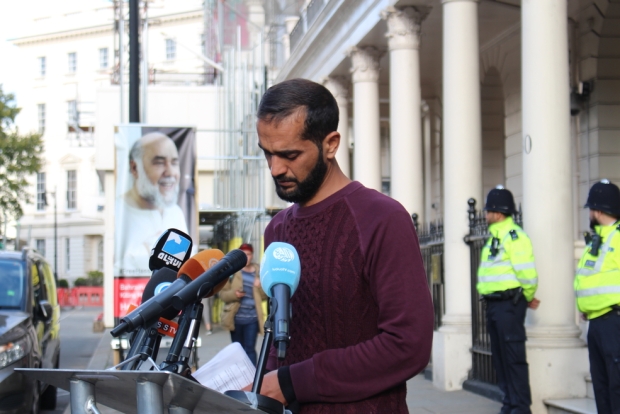 “That is why I see my protest as a success, not because it exposed how horrible the Bahraini regime and its allies can be, but because it showed me the good in all those who support justice.”

I will continue fighting for my father’s life, and am grateful to my wife for understanding, and the support given to me

Visibly emotional and wiping tears from his face, Mushaima said: “When I began this process my baby daughter was four months. Now she is six-months-old and I am excited to go home to play with her.”

Hassan Mushaima suffers from multiple diseases, including cancer, diabetes and high blood pressure. The elderly opposition leader was one of 13 activists arrested and sentenced to life imprisonment during a 2011 crackdown on opposition in Bahrain.

Before going on hunger strike, Ali Mushaima had written to several UK government ministers and parliamentarians, in a bid to raise awareness about his father’s prison conditions.

Hassan Mushaima was denied treatment after he refused to attend appointments wearing shackles, according to a statement released by Bahrain’s interior ministry. 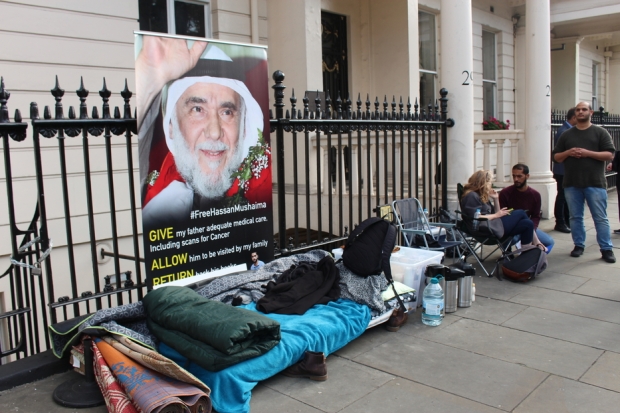 But since Ali Mushaima began his protest, the Bahraini government has allowed Hassan to attend a PET scan for his cancer without wearing any shackles, according to activists.

Hassan Mushaima’s treatment has been condemned by Amnesty International, which accused the Bahraini authorities of failing to provide proper medical care for him and three other elderly activists.

We are always being told that the UK stands for human rights and democracy around the world, it is time for them to listen to prioritise human rights

Before coming to the UK, Ali Mushaima was a bus driver and activist in Bahrain.

He had his Bahraini nationality revoked after being sentenced to 45 years in prison, and came to Britain as a political refugee in 2006 – where he has remained active in campaigning for rights in his country ever since.

Despite the ongoing crackdown against opposition activists in Bahrain, the UK government has continued to sell weapons to the Gulf kingdom. The British Royal Navy has a base on the island.

Data compiled by the Campaign Against the Arms Trade (CAAT) noted that Britain had licensed over $100 million worth of arms sales to the Bahraini government since it began its crackdown against opposition figures in 2011.

Andrew Smith, the spokesperson for CAAT, praised Ali Mushaima’s hunger strike and called on Britain to stop arming and supporting the Bahraini government.

“[Prime Minister] Theresa May and her colleagues have been complicit in the appalling treatment of Hassan Mushaima and other political prisoners in Bahrain,” Smith told Middle East Eye.

“We are always being told that the UK stands for human rights and democracy around the world. It is time for them to listen to prioritise human rights, and end the arms sales.”