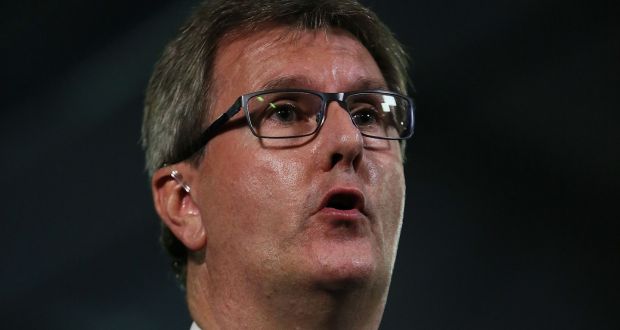 Jeffrey Donaldson, DUP MP for Lagan Valley, set up Causeway in 2011 with his brother, Kingsley, who looks after the day-to-day running of the company. Photograph: Brian Lawless/PA Wire

A leading human rights charity has alleged that companies owned by Invest Northern Ireland and Democratic Unionist Party MP Jeffrey Donaldson have trained organisations in Bahrain that later backed the executions of dissidents.

In its report, Training Torturers: the UK’s role in Bahrain’s brutal crackdown on dissent, Reprieve identified Northern Ireland Co-operation (NI-CO) and the Belfast-based Causeway Institute for Peace-building and Conflict Resolution.

NI-CO, owned by Invest NI, was paid about £1.5m to train Bahrain’s police and prison service, including on how to tell grieving family members about the deaths of loved ones in custody, and that officers would not be prosecuted for such deaths.

Bahraini police have been accused of abuses, including torture. Last year, three anti-government prisoners were executed after much-questioned trials, ending a seven-year moratorium on the death penalty.

Raising “serious questions” about the involvement of NI-CO and the Donaldson-owned Causeway, Reprieve director Maya Foa called on the currently-suspended Northern Irish Assembly to investigate.

The inquiry call was backed by NI Policing Board member, Brice Dickson: “If there is a suspicion that NI-CO and Causeway are propping up a regime that is abusing human rights than there should be an inquiry into that.”

In 2011, dozens of pro-democracy protestors were killed in Bahrain during the Arab Spring. Following international condemnation, the Bahraini government announced that it would end the use of torture.

Between 2013 and 2017, NI-CO was paid by the British Foreign Office to train Bahraini police officers, prison guards, and security staff on human rights as well as establish new bodies to investigate torture allegations.

NI-CO trained hundreds of Bahraini police officers, including 400 guards at Jau Prison, where prisoners were tortured and held in poor conditions, while senior Bahraini commanders visited Belfast to learn how to “manage large-scale public order issues in a human rights compliant fashion.”

During one visit, Police Service of Northern Ireland (PSNI) officers briefed them on community intelligence gathering and how to use dogs and water cannon. The PSNI’s involvement ended in late 2015, after concerns were raised at a meeting of the Northern Ireland Policing Board.

Causeway was hired by the FCO to work with NGOs and Bahrain’s National Institution for Human Rights. The company, which has also worked in Moldova, Colombia, Ukraine and Afghanistan, organised a number of study trips to Belfast for Bahraini delegations to “learn the lessons” from NI.

Causeway was set up in 2011 by Sir Jeffrey Donaldson and his brother, Kingsley, who looks after the day-to-day running of the company. The Democratic Unionist Party chief whip in Westminster chairs Causeway’s advisory board.

During the time that NI-CO and Causeway worked in Bahrain the size of the country’s death row tripled and were there sustained allegations of torture in detention and coerced confessions.

In 2017, Human Rights Watch reported that 138 cases of alleged torture had been referred to the Bahraini torture investigation unit trained by NI-CO, but only one case was successfully prosecuted.

Kingsley Donaldson said he could understand why Reprieve was looking for greater transparency but he felt that Causeway’s work in Bahrain had been valuable.

“I’m not surprised that people would want to understand more but I’m not uncomfortable with what Causeway was doing in Bahrain and how we did it,” Donaldson told The Irish Times.

NI-CO said it had worked in Bahrain from 2013 until 2017 to share “the relevant learnings and experiences” from NI, to change attitudes, culture and behaviour, ultimately to align Bahrain with “ relevant international standards.”