Human rights group Reprieve has accused the Foreign Office of being complicit in abuses in Bahrain and failing to be transparent about its £5m security and justice reform programme in the kingdom.

Between 2012 and 2017, funding for the programme was largely drawn from the controversial conflict, security and stability fund, which supports global security and peace building in conflict zones, according to freedom of information requests.

The Department for International Development is the largest contributor to the fund, which is worth £1.2bn a year, although its priorities are dictated by the national security council.

The CSSF was recently criticised by the UK aid watchdog for serious shortcomings in the way it operates. It was found to have been insufficiently rigorous in applying safeguards to prevent collaboration with foreign entities with suspect human rights records.

In its report, Reprieve said that despite the training of prison officers, police and other officials by British companies in the kingdom since the Arab spring, the number of inmates on death row has tripled, torture in detention has continued, and executions have resumed for the first time since 2010.

Reprieve, said that, by providing training to groups that later backed the executions of dissidents – and because of its failure adequately to investigate torture allegations – the British government was complicit in human rights abuses in Bahrain. The report was co-authored by Bahrain Institute for Rights and Democracy.

The report comes after an aid watchdog criticised the conflict, security and stability fund (CSSF) recently for serious shortcomings in the way it operates, including that it had been insufficiently rigorous in applying safeguards to prevent collaboration with foreign entities with suspect human rights records.

Maya Foa, director of Reprieve, called on Britain to require Bahrain to take basic anti-torture steps as a condition of further assistance, and to be more transparent about funding.

She said: “A global Britain should be proudly promoting human rights and the rule of law, not undermining them in secret.

“The only way for the British public to be confident their money is not leading to abuses abroad is for the government to publish a full and transparent account of projects we are funding and the human rights assessments for each.” 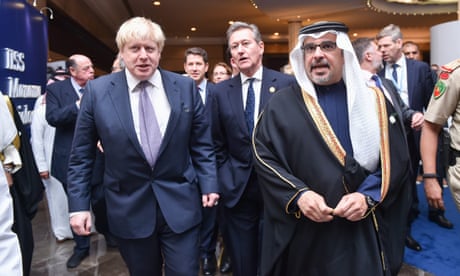 Between 2016 and 2017, the FCO spent £1.5m on British expertise to reform Bahrain’s security and justice system, through the CSSF.

However, this year, the UK’s contribution to the project will come from two new sources, the Global Britain Fund and the Integrated Activity Fund, which Reprieve say is more opaque.

A Foreign Office spokesperson said: “We regularly raise concerns on specific issues at a senior level with the government of Bahrain, but it is not good enough just to criticise countries from the sidelines. Only by working with Bahrain can we bring about the changes we would like to see in the country.”

The spokesman welcomed a recent decision by Hamad bin Isa al-Khalifa, the king of Bahrain, to commute four death sentences.

… we have a small favour to ask. More people are reading the Guardian than ever but advertising revenues across the media are falling fast. And unlike many news organisations, we haven’t put up a paywall – we want to keep our journalism as open as we can. So you can see why we need to ask for your help. The Guardian’s independent, investigative journalism takes a lot of time, money and hard work to produce. But we do it because we believe our perspective matters – because it might well be your perspective, too.

I appreciate there not being a paywall: it is more democratic for the media to be available for all and not a commodity to be purchased by a few. I’m happy to make a contribution so others with less means still have access to information.Thomasine, Sweden

If everyone who reads our reporting, who likes it, helps fund it, our future would be much more secure.