A Danish MP and an Irish human rights activist have been denied entry to Bahrain after they cited their reason as visiting a prominent Bahraini prisoner.

Lars Aslan Rasmussen and Brain Dooley wrote on their visa application “To visit jailed human rights defender Abdulhadi Al-Khawaja” as the purpose of their visit.

Dooley, a senior adviser to the Human Rights First organisation, and Rasmussen had arrived at the airport on Wednesday morning and were photographed holding up Khawaja’s poster in the airport.

In a series of Twitter posts, Dooley said that airport security officials informed him and Rasmussen that they were “security risks”.

Despite refusing them entry, airport security has refused to hand over their passports back, where they have been waiting in the airport for more than 15 hours, Dooley said, describing the situation as a “Kafkaesque scenario”.

A Bahraini government spokesperson said that the two foreigners had probably known that they would be denied entry for not following the required procedures.

“Two individuals were denied entry to Bahrain this morning having failed to follow the country’s clearly defined visa and immigration procedure,” the spokesperson said. 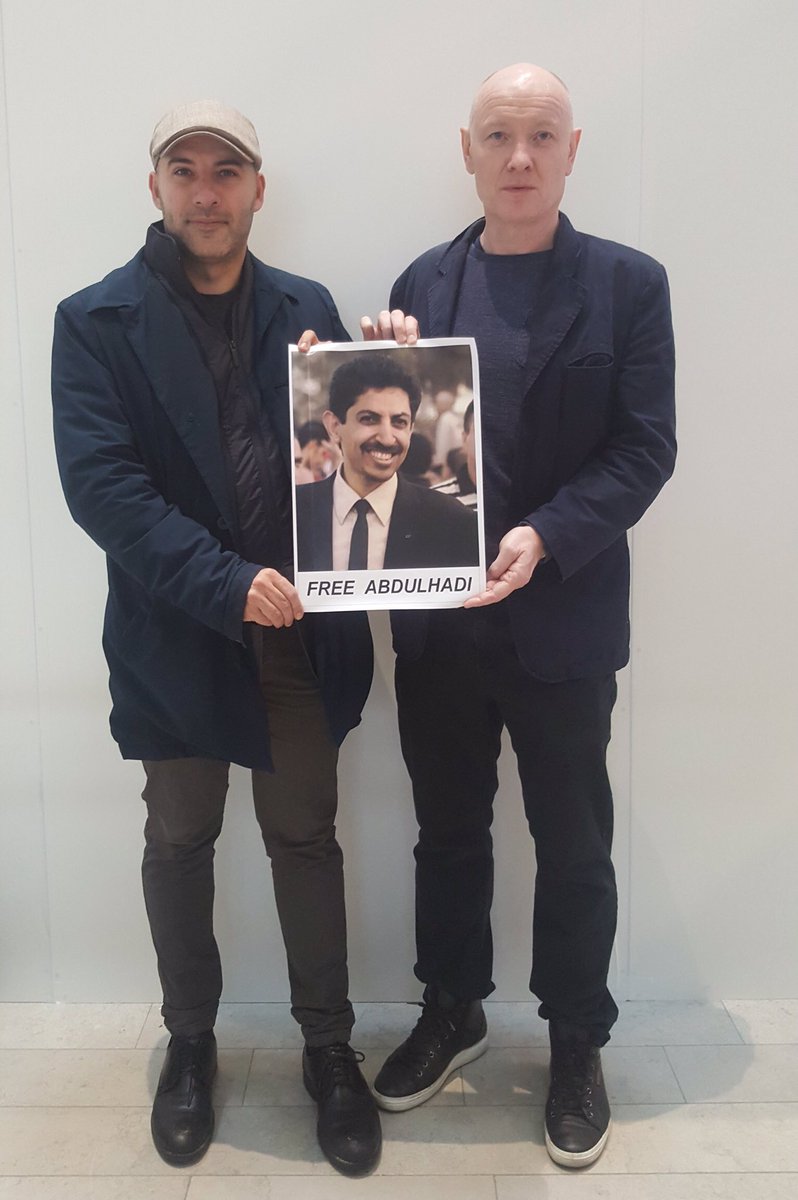 Khawaja, who also has Danish citizenship, was arrested by Bahraini security forces in April 2011 following the country’s short-lived uprising advocating for government reforms.

He was among 13 other activists and political leaders, were tried in a military court and charged with “organising and managing a terrorist group”.

Khawaja and six of those charged were sentenced to life in prison the same year. Human rights organisations condemned the trials and called the detainees “prisoners of conscience” convicted simply for attending protests.

Khawaja’s daughter Maryam wrote on Twitter that the Danish government must do more to ensure the release of her father.

“On the 5th of April Abdulhadi Al-Khawaja will turn 57, and on the 9th of April it will have been seven years since he was beaten unconscious and arrested,” she posted on Twitter.

He was then “severely tortured, subjected to enforced disappearance, and then sentenced to life in prison”.

Bahrain is due to host its annual Formula One race, watched by millions around the world. The race has been held each year since 2004, with the exception of 2011 when the uprising forced its cancellation.

“Preventing members of parliament, human rights groups and journalists from entering the country shows how much the regime has to hide,” Dooley said a statement released by the Bahrain Institute for Rights and Democracy (BIRD), a London-based “non-profit organisation for promoting democratisation and human rights in Bahrain”.

“Formula One fans planning to arrive this week should know what they’re getting into.”